Skip to content
What’s in a name? that which we call a rose By any other name would smell as sweet.Romeo and Juliet (2.2.45-7)

The Shakespeare Garden,within the house’s former walled gardens,  was opened on July 22 1915 by the Lord Mayor of Birmingham, WH Bowater.

This idyllic, restored garden is named after the bard due to its featuring plants and shrubs all named in the playwright’s works. It was laid out in an Elizabethan theme with box hedges, herb garden, fruit trees, a fish pond, sundial as well as a rustic pergola and seating.

The idea was suggested by Mr George Johnson, Chairman of the City of Birmingham's Parks Committee and he produced an accompanying booklet entitled 'A Complete List of Shakespeare's Plants for use in the Shakespeare Garden, Lightwoods Park, Birmingham.' A copy of this publication is held by Sandwell Council and has provided a planting list for the restoration project, that keep as close as possible to the original plans.

The garden is open to the public as a peaceful place to sit and enjoy. It is also a fantastic venue for weddings, receptions and other events.

To book or enquire about the Shakespeare Garden, email lightwoods_house@sandwell.gov.uk

Learn more about the plants in the Shakespeare Garden. 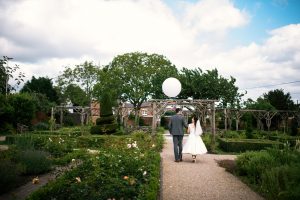